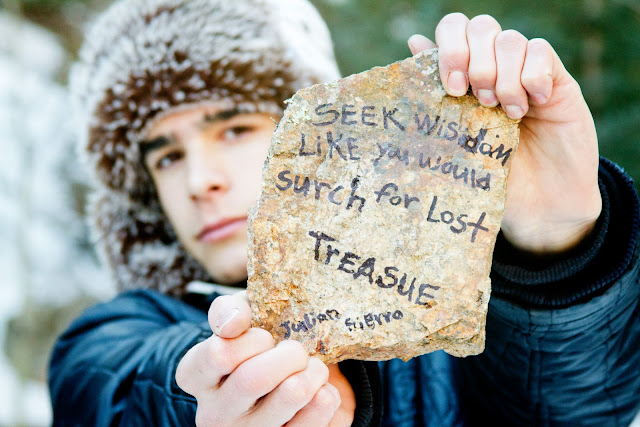 On my last few days on the ranch in Colorado, my camera became a staple at my side. I shot this and shot that, making sure I took it all in before I took off. Some of that included photos of the group still on the ranch. I normally don’t ask students to pose for anything – just shooting them in their candid actions, but this time I couldn’t help myself. I had ulterior motives for the student slideshow, but also, this student had taken such care with writing this rock. It was almost as though he had planned out the trip to focus around this closing activity. He carefully plotted what sort of rock he would pick (normally students just pick any rock, but he chose a large flat rock specifically for ideal writing space and surface). He practiced writing his quote out in his notebook, stopping to trace several words in the air above his notebook paper before cementing them to this rock in permanent marker. And finally, he slowly etched this quote onto his rock … making only two spelling errors. One that he caught and wanted to correct before taking this photo, and the other, which I didn’t catch until looking at this picture. I wish he had left the original, without correcting the first error. I personally think it makes the photo. I’m incredibly grateful there was a second. It’s what gives this piece the extra character. After self-consciously posing for this photo, and being reassured that he would be blurry, and not the focus of the image, he delicately laid his rock right in the center of the labyrinth that we have at the ranch and then gave it one good stomp with his oversized boot, securing it into its snowy location. We then set off up the hill and away from the activity that has continually had such an impact on me over the last year. Thanks, Julian, for being my grand finale for this moment. You helped me sum up a year of experience in one final hoorah – all without even realizing it. For you, I wish you find the treasure for which you seek.

And in this last moment of reflecting on this image one last time, I found another spelling error. Maybe it was there all along, or maybe I wished it into this image in these last moments before publishing. Taking me back to the original imperfections I desired – the same that make this image so perfect. It’s ironic that something that may seem so small in this image, relates much more largely to everything the ranch stands for. And with that, I sign off for the evening with a feeling of complete satisfaction. : )