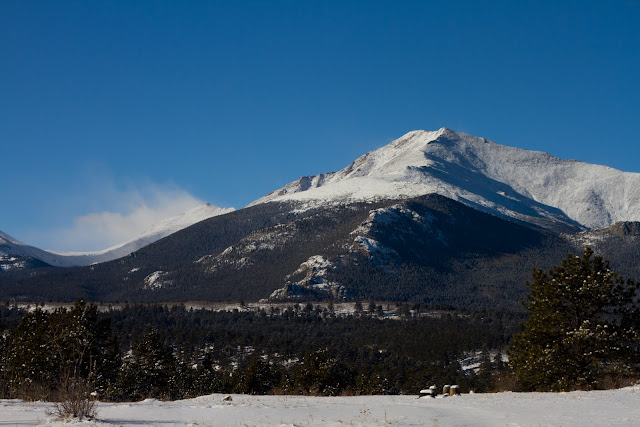 This fantastic mountain has been my landmark to find my home over the last year. Just a couple miles down the road you can see this peek and it’s predecessor, Long’s Peak, from across the border in Wyoming or all the way down in Denver. Though Meeker stands a meer 13,911 feet high, it does not earn the label of being a ‘Fourteener’. Poor Meeker. Long’s, however, which is not visible in this photo, but actually stands behind it, rises to 14,256 feet, leaving it’s companion in it’s shadows. These two peaks have been the topic of many conversation over the last year and a sight for sore eyes upon returning home from trips. Right out my backdoor, I’ve been a bit spoiled having these monsters just a stone’s throw away for the last thirteen months.

Meeker is a part of the “Sleeping Indian” mountain as well. I’ve heard this also called “Chief’s Head” and that it simply sits in the “Sleeping Indian Mountain Range”, but not being a native of this area it’s hard to distinguish what is the original name. Referencing the above photo, the peak of Meeker is this belly of the resting man. Follow the side of the mountain down to the left until it disappears for a short distance. Imagine this to be the chief’s neck that we cannot see and as the mountain reappears we are at his chin. In this image, the snow is blowing off the mountain (not a cloud) and hit face is fuzzy, but still visible behind the billows. From the chin continue left and as it peaks up slightly, this is his nose. Follow the slant of the nose down to the ‘eye’ and then continue on down the strong slant of the forehead. His forehead swoops off into that deep saddle, or a potential headdress.